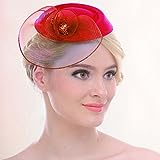 Fascinator Introduction:
A fascinator is a headpiece, a style of millinery. Fascinators were originally a type of lightweight knitted head-covering. Since the 1990s the term refers to a form of formal headwear worn as an alternative to the hat; it is usually a large decorative design attached to a band or clip, sometimes incorporating a base to resemble a miniature hat, in which case it may be called a hatinator.

Today, a fascinator may be worn instead of a hat on occasions where hats were traditionally worn such as weddings or as an evening accessory, when it may be called a cocktail hat. It is generally worn with fairly formal attire.

A substantial fascinator is a fascinator of some size or bulk. Bigger than a barrette, modern fascinators are commonly made with feathers, flowers or beads.They need to be attached to the hair by a comb, headband or clip. They are particularly popular at premium horse-racing events, such as the Grand National, Kentucky Derby and the Melbourne Cup. Brides may choose to wear them as an alternative to a bridal veil or hat, particularly if their gowns are non-traditional.

This website uses cookies to improve your experience while you navigate through the website. Out of these, the cookies that are categorized as necessary are stored on your browser as they are essential for the working of basic functionalities of the website. We also use third-party cookies that help us analyze and understand how you use this website. These cookies will be stored in your browser only with your consent. You also have the option to opt-out of these cookies. But opting out of some of these cookies may affect your browsing experience.
Necessary Always Enabled

Any cookies that may not be particularly necessary for the website to function and is used specifically to collect user personal data via analytics, ads, other embedded contents are termed as non-necessary cookies. It is mandatory to procure user consent prior to running these cookies on your website.